Showing posts from May, 2011
Show all

May 14, 2011
Most Europeans will go through a series of swings in their attitudes towards the US. As children, they will get their information from movies and TV shows, and particularly the sort of simplistic adventure/action fare that appeals to their agegroup, and therefore conclude that all that is good in the world happens in the US, and all that happens there is good. Later they might learn a bit more and get a more nuanced impression, perhaps occasionally swinging the other way due to the inertias involved in finding out the promised land has problems as well. It is in fact perfectly true that the US has many serious problems: a foreign position requiring constant upkeep, a healthcare system which leaves millions with little or no care, school quality which varies wildly across the country and even across school districts in the same urban area. More fundamentally, the country is divided into opposing camps, with widely divergent views on a slew of issues, which has threatened to paralyze
Post a Comment
Read more

How to see imaginary colors 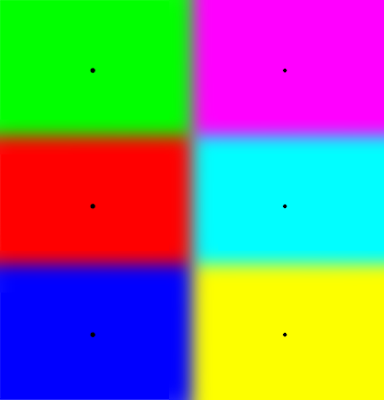 I will now show you a way to see colors that cannot exist in nature. To do this I'm going to hack your brain, but don't worry, you won't feel a thing, and it doesn't involve taking any controlled substance. Ready? Ok, say you want to see a green more intense than any green that has ever existed on the face of earth(and in fact the universe). Stare at the top right dot (in the magenta field) and count to fifty. Try not to move your eyes too much.Then look very quickly at the dot in the green field. And there you have it. A shade of green you have never seen before, and will only see again in this or a similar test. What's happening? When you stare at any color for a while, you're eye's sensitivity to it decreases, and the sensitivity to the complemetn (i.e. opposite, in a sense which trascends the point of this post). Well to make a long story short, each row has one of the Red-Green-Blue primaries on the left, and its complementary color on the right.
Post a Comment
Read more 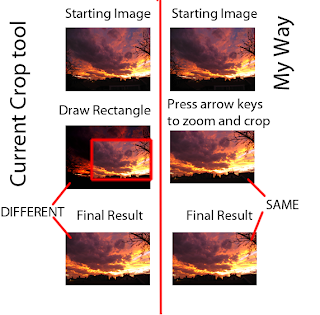 The way cropping is universally (as far as I know) implemented in photo editing software is by allowing the user to draw a rectangle on the part of image you want to save. Most programs dim the part you'll be throwing away, which helps you a bit in seeing your final composition, but the image itself doesn't zoom in or out, which is what actually happens when you crop, assuming you keep the paper or display area the same size. The way it SHOULD be done is how it happens in the blackroom. For those of you who have never developed their own B&W, you use a projector to paint the image from the negative unto the paper, and cropping is accomplished by moving the projector further or closer to the paper, which makes the image larger or smaller by "zooming" it. Of course its also a minor annoyance because the image gets dimmer and you have to refocus, but that doesn't need to carry on to digital. So the correct way of implementing the crop tool is by displaying the
1 comment
Read more 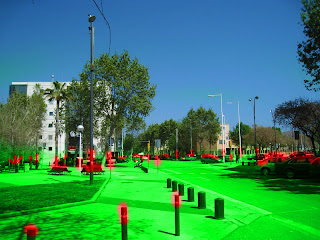 If you've been in a camera store in the last 5 years, you've certainly at some point seen a camera with a tripodish thingy hanging at an impossible angle from a conveniently placed pole. That was a Gorillapod , a nifty little gadget with three legs which can be either used to conventionally support the camera on a possibly uneven surface, or used to grab a pole, branch or rail. The promotional material is obviously full of pictures of a Gorillapod-supported camera set up in exotic, exciting and glamorous locations, and is understandably appealing to photographers knowledgeable enough to understand the usefulness of a tripod, but unwilling to carry a full-sized around. They come in various sizes and rated weights, with or without a ballhead, and with optional magnetic feet which allow it to cling to certain metals . Ok so here's the rub. I think that the small version may be a nice thing to have for a compact camera, but I can't say the same for the SLR version. I bou
5 comments
Read more